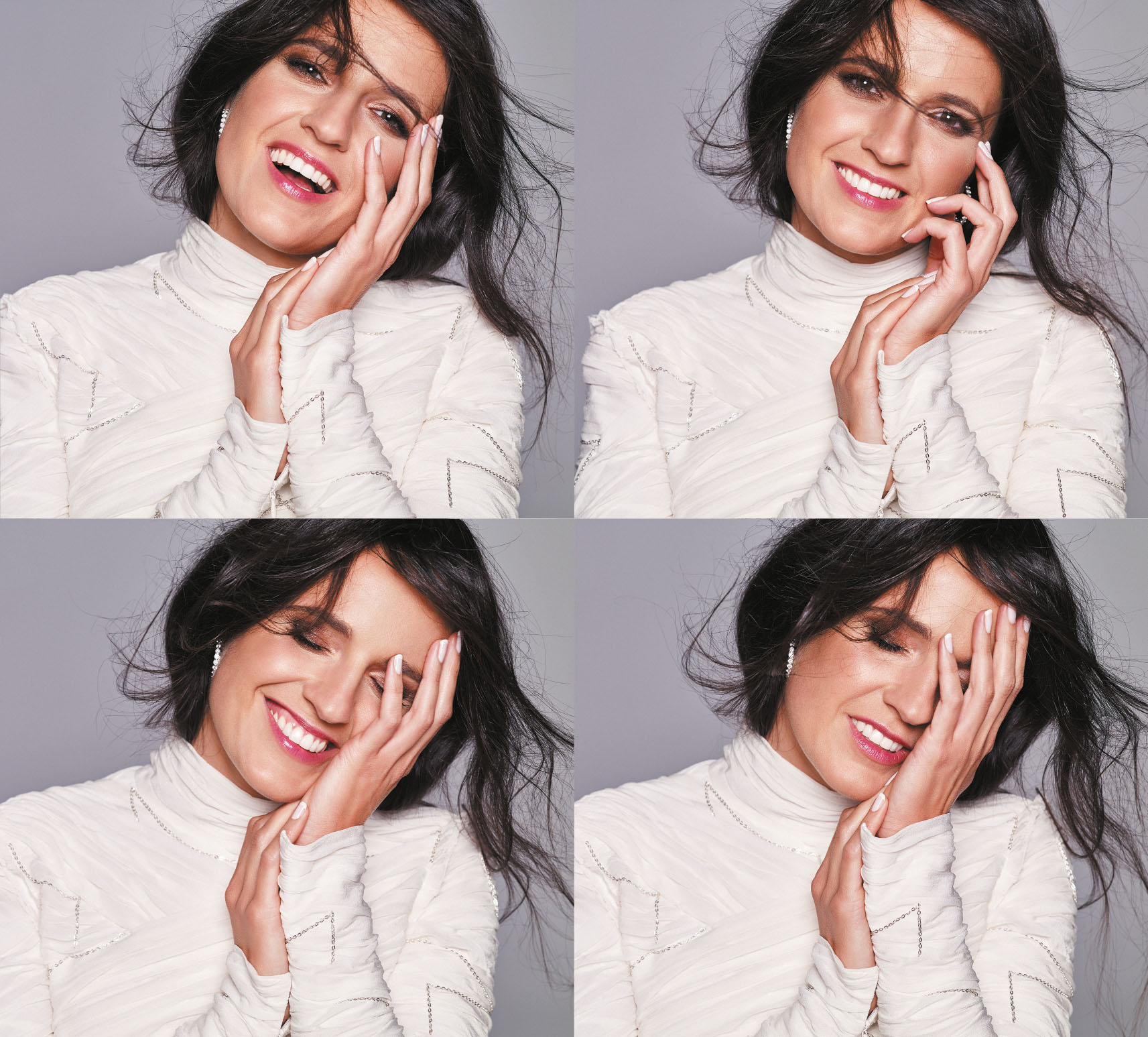 Joanna Jakubas is pleased to present her first album “My New Wings” featuring 17 popular songs, including the single “Spente le Stelle” and classics such as: “Nights In White Satin”, “Hallelujah” and “I Will Always Love You”.

The album was recorded in London at AIR Studios Lyndhurst, one of the world’s largest recording studios, and at the iconic Abbey Road Studios, where such music greats as The Beatles, Pink Floyd and U2 recorded their greatest albums. The London Symphony Orchestra, one of Britain’s leading orchestras and one of the top five orchestras in the world according to Gramophone, was invited to participate in the project. The album’s music producer is Jan A.P. Kaczmarek – a world-famous Polish composer and Academy Award winner for the original soundtrack of the film “Finding Neverland” (2004). The arrangements were written by Nick Ingman- an arranger, composer and conductor in the commercial music field who has worked with artists such as Paul McCartney, Mick Jagger and Björk.

Accompanying Joanna Jakubas in songs such as: “Spente le Stelle”, “Nella Fantasia” and “My Heart Will Go On” are the London Voices- Britain’s famous choir involved in soundtrack recordings for: “The Hobbit”, the prequel trilogy of “Star Wars”, “The Lord of the Rings” and the “Harry Potter” series. Simon Rhodes, the album’s recording and mixing engineer is a 4 x Grammy Awards winner and has worked with James Horner on over 40 projects, including the motion picture “Avatar”. Simon Gibson, the album’s mastering engineer, is one of the world’s leading audio restoration and mastering experts who has worked with artists such as: Depeche Mode, Robbie Williams and The Beatles.

Joanna Jakubas is a lyric soprano. She graduated with a Bachelor of Music degree from the Manhattan School of Music in New York. During her education in the US, she participated in the Vocal Arts Symposium in Spoleto, where she had the opportunity to perform for the Italian audience – first in Teatro Clitunno in Trevi, then in Teatro Caio Melisso in Spoleto. Joanna continued her vocal arts education at the Royal College of Music in London, which she graduated from with a Master of Music in Advanced Vocal Performance.

Joanna Jakubas debuted on the stage in summer 2007 when she was invited by the famous Polish classical music journalist and music critic Bogusław Kaczyński to attend the International Jan Kiepura Festival. Her next performance at the International Jan Kiepura Festival the following year resulted in her cooperation with the Cracow Philharmonic and her participation in the Andrea Bocelli concert at the Gwardia Stadium in Warsaw.

In 2010, Joanna Jakubas performed with the Polish pianist Stanisław Drzewiecki at the 20th anniversary gala of the Polish Business Club in the Congress Hall in Warsaw. That same year, she began her cooperation with the Jan Kiepura Mazovian Theatre, taking part in a series of concerts at the National Philharmonic in Warsaw, Witold Lutosławski Concert Hall of the Polish Radio and the National Opera. The concerts were conducted by famous Polish and international conductors such as Jerzy Maksymiuk and Jose Maria Florêncio.

Joanna Jakubas is the winner of the Jan Kiepura Theatre Music Award in 2011 in the category “Best Singer’s Debut of the Year”. She has also appeared in three Polish films: Wojciech Wojcik’s “Blind Date”, Ryszard Zatorski’s “Los Numeros”, and Robert Gliński’s “Stones for the Rampart,” where the DOP was Paweł Edelman (Oscar nominee for “The Pianist”).

Joanna has also recorded two songs: “Take a Chance”, written by the American songwriter Matthew Moore, and “Blind” in duet with Alexandra Vouté, composed by the British composer Paul Prichard. Both songs can be heard in the film “Randka w ciemno”, which for Joanna was also the inspiration to perform the song “Moja Gwiazda” (“My Star”) written by the popular Polish composer Adam Sztaba with lyrics by the legendary Polish songwriter Jacek Cygan.

In 2015, Joanna Jakubas made a guest appearance in Ennio Morricone’s concert at Arena Cracow, where she performed a piece from Roland Joffe’s film “The Mission”. In October 2015, she made her debut at the Opera Bastille in Paris, singing the role of Kate in Giacomo Puccini’s opera Madame Butterfly.

In 2017, Joanna performed at the Transatlantic Film Festival, which is organized annually by the Polish film score composer Jan A.P. Kaczmarek (Oscar winner for the original soundtrack of “Finding Neverland” in 2004). She also took part in three concert series of the Musical Theatre in Lodz – “Musical Journey from Vienna to Rio” (2016-2017), “Step By Step” (2017-2018) and “The Best of The Musical Theatre” (2018-2019). During this time, she also performed the role of Cosette in the musical Les Misérables by Claude-Michel Schönberg as well as Wanda in The Grand Duchess of Gerolstein by Jacques Offenbach.

In December 2019, Joanna had the pleasure of performing at the “Most Beautiful Carols” concert in Lubin, broadcast on the Polish television channel TVN. During this concert, Joanna Jakubas performed together with the biggest Polish pop music stars, including Edyta Górniak, Golec uOrkiestra, Justyna Steczkowska, Andrzej Piaseczny, Kayah, Michał Szpak, Sławek Uniatowski and Aleksandra Gintrowska. The artists were accompanied by the National Brass Orchestra conducted by Mariusz Dziubek.

In December 2021, Joanna released a Christmas album “Carols 21”, which is currently available on Spotify and TIDAL. The songs were aired by Radio ZET and Radio 357 and in a survey conducted by Radio ZET, they were ranked among the top songs chosen by the listeners.